I stand upon a precipice. All around me wavers in the wind, but I am still. I took lessons from a butterfly years ago, somehow though wavering in flight, always lands with the utmost grace and peace. Always with peace. I am an ant, but it is wiser than I to store and then to hibernate. I am one ant, reveling in my significant insignificance. I would much rather be an ant than a tortoise. The tortoise looks wiser, with its aged wrinkles and deliberate actions. But I could not be a tortoise because estivation would not sit with my constitution half so well as hibernation. I like the sun. And now that I think it, how odd that the ant has no wrinkles though it is always in the sun and dead to the winter, while the tortoise is wrinkle-worn though it is shelled for all the summer. UV rays lie to us. Science is a farce. The tortoise is really a walnut.

What is real? Science tries to tell us, but why should we trust what “they” just discovered yesterday?!? Philosophy attempts explanation, yet we have known innately for all our days the tenants it spews forth in pretty words. Maybe someone had it right, “All the world’s a stage” he said. I like to call him Billy. It tiptoes upon the irreverent and sends scholars into frenzies. Anything to change the status quo. A stage. Here today gone tomorrow. A stage. Ever changing yet always fixed. A stage. Both empty and complete without people. A stage. Made by men and synonymously making them. Yes, the world is a stage. Today I will listen to Billy.

I watch the waves upon the seashore. The world is a wave, crashing upon eternity, sending droplets of saltwater upon the heavens. Eternity is the shore that it crashes on. Heaven is the floor of the ocean, containing all, sending pieces of itself to the surface to be crashed upon a playing child’s sandcastle. Does the sea get its salt from below, or is it the other way around? I’ve tasted sea and sand – both made me pucker and cough as my skin reddened because all the good oils were being washed away, with my cells. My cells do not like salt. It sucks the cytoplasm out of them and then they die. The big book on my dusty shelf calls this “osmosis”.

Don’t look here for answers. The moment I give answers is when I have forgot my place in the script, or maybe I have stepped off the stage looking for something else and fallen. Why do we think that illusion and reality are foes? I say they are the same, constantly osmosing and never fighting for the kingdom. The precipice is higher than I thought, and deeper, and wider. 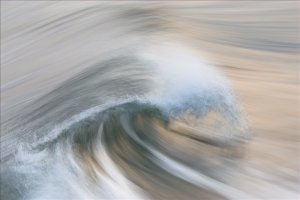