The smell of pines rushed quickly in as four arms and legs ascended into the first heaven with the scampering speed of some small rodent. A new tower of Babel was created – we would reach the top with the greed of making a throne at the top. I’d like to say I reached the pinnacle first, but perhaps he did, or it was a tie.

The cold nipped at our noses, we had all become Rudolphs that day. We pressed and dug and stacked and moved – we were taking dominion of the white flecks of water that had visited from the waters above. We would take care of our Eden, we would subdue and order this creation – we would be faithful Adams. Our snow fort would be more formidable than Goliath’s armor, and we would shield our foreheads. The battle was waged, canon balls of white were launched at record speed, and we were laughing – always laughing….

The snow-runoff water of our stream threatened our small corpora, but our hearts tried to compensate, sending reinforcements to the extremities. Why do I mention now what gave no notice then? The frigid water was no bother, we were hunters that day, our prey had two pinchers and could launch backwards with one flip of the tail. Our crawdads were brownish (or were they reddish, or orangish?) and they were going to give a fight for life, but so were we – they were our sustenance and we would not have mercy.

The plans were written, blueprints drawn – I’m sure there were nearly as many as Solomon had for his Temple. The seven of us were saying “adios” to our family dwellings and building our third and largest cabin. The other two were forts, but this would be the sanctuary of our honneur et vertu. To us this would appear as more perfect than Olympia’s Zeus, more mathematical than the Great Pyramids, more beautiful than Babylon’s Gardens – it would be the First Wonder of our World. And it was, it was the centre of our kingdom, where we played and ate and played and slept and played. It was paradise.

The tree was timbered.

The crawdads enjoyed peace at last.

The fort has fallen to an unknown enemy.

We are all adults now, the Clear Creek gang is all over the world.

The seven-fold band is unwound, but the strands still come from the same strong beginning.

And what has the mind done to reality? Why can’t I remember crying or spankings or schoolwork? What kind of great illusion has time placed upon those younger years?

I think I’ll go make a fort and find out. 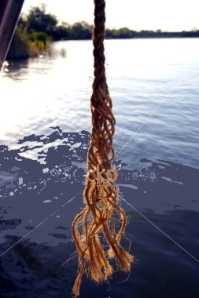 3 thoughts on “The Smoky Haze of Childhood Days”